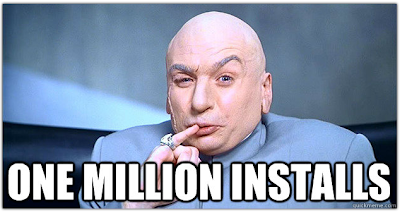 It's not a like for like comparison, but it's fair to say that google play is king!

My first game was published on google play 8th august 2012. I don't really know how such a simple game became such a success, maybe it has something to do with the fact I open sourced and wrote about my learning process on this blog? From the reviews it's clear that some people love it, and some people hate it (lots of 5*, lots of 1*, not a lot of anything in between!). Creating that game helped me learn some game making basics, it was more for my own benefit than a proper attempt at making a commercial game. Half a million installs later, even if only half the people that installed it like playing it, that's a quarter of a million happy players :)

Next I started experimenting with 3D, and published a demo on the 25th August 2012 (also open source :)). Not a huge number of installs (~25,000), but that's not surprising as it's a rough tech demo, not a proper finished game. I'd love to do some more 3D stuff, but the worst part of it has to be asset creation. It doesn't take me long to hand draw a cartoon character, scan it, and trace it in paint.net... Building decent 3D assets is a whole different barrel of ball games.

My third game was the result of a personal make a game in a weekend challenge. I didn't manage to make it in a weekend, but it didn't take all that long, over 50,000 installs isn't too shabby all things considered :)

My fourth game is no more... Don't use the evil monkey from family guy in your games kids, fox's lawyers will come get you while you sleep!

Quack Attack is what I consider my first 'proper' game. I spent a bit more time and effort on this one, and as a result it's a bit more polished than the earlier games. First published on google play 10th March 2013, it has already racked up over 300k installs there. This is the first game I uploaded to any alternative markets. Slideme was totally painless, as was opera market, published within a day or two of publishing on google play. Amazon was a bit of a hassle, failed the review process three times before finally being published on the 28th May. Now that I have a handle on doing things the amazon way, it's not a problem creating amazon versions of my games, but whether it's worth the bother or not remains to be seen. 341 installs in the first fortnight on amazon versus 58,800 installs in the first fortnight on google play suggests that maybe it's not...

Hardest Free Brain Game (aka "4 Games 1 Screen") is my most ambitious published game to date. The concept is simple - give your brain a workout by playing four independent games at once. I had hoped that this game would be a big success, it's a bit of a break from the norm (though admittedly not totally original), and it really makes the most of the mobile platform - tilting, swiping, tapping, etc. Sadly it has been something of a flop so far, since the 14th May there have been 6,521 google play installs, 3,757 slideme installs, 299 opera installs, and I haven't bothered with an amazon version yet. I guess trying to make something a bit different and innovative is a risk. Still, I make games for fun, and I had a *lot* of fun creating this game. I don't think making yet another generic match-3 or tetris style game would have been anywhere near as much fun, though it would no doubt be a greater commercial success. Anyway, shameless plug time - If you've not tried it yet, go give it a go - this video should get the point of the game across, it's frustrating, fun, and free, you've got nothing to lose :)

Finally, we get to my most recent game Street Race Swipe (there's an open source tutorial version if you want to learn a little about LibGDX Scene2D!). Amusingly, this game is essentially a slightly beefed up version of just one of the four games in my Hardest Free Brain Game. It has been installed over 32,000 times in the first three weeks it has been live - that's pretty good going! The whole point of publishing this standalone version of Street Race Swipe was to try and drive downloads of Hardest Free Brain Game. Turns out the standalone game is by far and away a bigger success than the ambitious 'concept' game. I'm happy to look on the bright side and chalk that up as a win. Next step will be to upload Street Race Swipe to slideme and opera, maybe even amazon. After that I might extend the other three minigames and release them as standalone apps too!

As for what else is bubbling away in the lab... A mario/sonic style platformer, a box2d game, a casino card game, another interesting 'concept' game based on motion detection (no doubt another commercial failure in the making!), two different tower defence games, and a 3D infinite runner game... I should really pick one of these games and get it finished and out there. Starting something new before finishing what has already been started is a very bad habit of mine... I'll never get to one billion downloads if my games don't get finished and published :)

Right now though, I'm going to take a short break from making games, a couple of weeks off to enjoy the sun is in order I think :D
Posted by TheInvader360 at 08:00